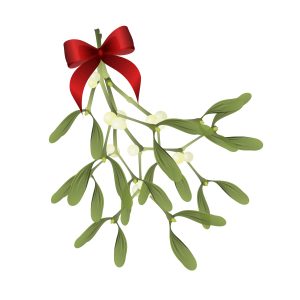 Most people think that Mistletoe placed in a doorway is just for kissing in Christmas time.. So simple!

Mistletoe was used for its medicinal properties from ancient Celtics monks before the time of Christ, 2,000 B.C. until nowadays by European and U.S. pharmacopeia as medicinal plant. Mistletoe by celtic language means “the all healing.”

The empirical use that Mistletoe has been given over the centuries now has confirmation thanks to the analytical and gas chromatograpy techniques that have allowed to confirm its innumerable properties.

Since ancient times Mistletoe and Holly have been part of the Christmas tradition with its red or white fruits and its evergreen leaves. Legends and traditions in Europe and the United States identify these two perennials, as a symbol of good luck.

The monks of the Celtic´s culture, the Druids, attributed to Mistletoe the power to protect and heal almost any type of illness or disease.

The Celts were a dominant people in Europe until the arrival of the Romans civilization. In the Celtic folk tradition, the couple kissed under the Mistletoe, hung on a door, it was considered love in the couple would be long lasting.

The ancient legends said that the magical healing powers of Mistletoe were due because it was created as an element that was not from heaven or earth, since its roots never touch the earth but it does not sustain itself in the air.

The Mistletoe, was a sacred plant for the Druids and had a strong relationship with the Gods and immortality. It was also considered a symbol of peace and a powerful protective amulet.

Mistletoe and Holly are among the few plants that bloom during the Christmas season and are widely used to decorate and create a Christmas atmosphere in homes. Even having the same significance we should not confuse them because they are two shrubs with very different purposes.

While Holly is more decorative; Mistletoe is a plant with medicinal properties.

The Mistletoe is originally between Northern Europe, North and Central United States, Central and North Asia and Japan.

It is an evergreen, hemi-parasitic plant, hosted and growing on a different trees,

The main ingredients of the Viscum album extract are its low molecular weight proteins or lectins (mistletoe lectins, ML) ML-1, ML-2, and ML-3 and flavonoid compounds as antioxidants.

The influence of the good environment, have a key role in the quality compounds of Mistletoe´s leaves or stems. The host trees should be located in semi-shaded to sunny area.

Mistletoe revealed its biological potencial as antioxidants, antiinflammatory and inmunostimulant properties due its main active compounds as lectins, flavonoids and carotenoids which has been thoroughly researched in Europe. The fermented juice of the entire Mistletoe plant and only its white berries; both has been extensively studied through several clinical trials.

Along last several decades, European Mistletoe has been used developing a noteworthy anti-tumor and immunostimulant activity as an alternative treatment or adjuvant in cancer therapy, mainly in Germany and Switzerland.

These results have been achieved with very low doses of lectins; These low concentrations are in relation to homeopathic dynamizations. It could not be otherwise because in high doses it would have a toxic effect on the body cells.

There is a trend from some decades for the natural antioxidants compounds from plants over synthetic ones, due its slight or negligible side effects.

What’s About of Oxidative Stress on Hair Loss

Oxidative stress is an imbalance between the reactive oxygen species(ROS) and inner biological system´s ability to detoxify and repair the resulting damage.

Degradation on hair fibers is caused by oxidative stress and loose in the dermal collagen on the scalp. The collagen around each follicle become rigid, compressing and pushing, the hair is fall out prematurely.

Our Criteria About the Quality of Mistletoe

Our Mistletoe is obtained from the fermentation process of the plant´s juice. The juice of Mistletoe from summer and winter harvest are mixed together bringing full effectiveness of its compounds.

Aloe Vera and Its Properties For Your Scalp

The 7 Most Important Minerals for Hair
Scroll to top
We use cookies on our website to give you the most relevant experience by remembering your preferences and repeat visits. By clicking “Accept All”, you consent to the use of ALL the cookies. However, you may visit "Cookie Settings" to provide a controlled consent.
Cookie SettingsAccept All
Manage consent

This website uses cookies to improve your experience while you navigate through the website. Out of these, the cookies that are categorized as necessary are stored on your browser as they are essential for the working of basic functionalities of the website. We also use third-party cookies that help us analyze and understand how you use this website. These cookies will be stored in your browser only with your consent. You also have the option to opt-out of these cookies. But opting out of some of these cookies may affect your browsing experience.
Necessary Always Enabled
Necessary cookies are absolutely essential for the website to function properly. These cookies ensure basic functionalities and security features of the website, anonymously.
Functional
Functional cookies help to perform certain functionalities like sharing the content of the website on social media platforms, collect feedbacks, and other third-party features.
Performance
Performance cookies are used to understand and analyze the key performance indexes of the website which helps in delivering a better user experience for the visitors.
Analytics
Analytical cookies are used to understand how visitors interact with the website. These cookies help provide information on metrics the number of visitors, bounce rate, traffic source, etc.
Advertisement
Advertisement cookies are used to provide visitors with relevant ads and marketing campaigns. These cookies track visitors across websites and collect information to provide customized ads.
Others
Other uncategorized cookies are those that are being analyzed and have not been classified into a category as yet.
SAVE & ACCEPT